For us, the best part of travel, well apart from experiencing new cultures, new sights, is the food! A chance for us to escape salted cod, rice with chips and overcooked veggies for a while.

When a friend suggested we should sign up for a secret food tour in New York, we thought why should we? After all, Jon is American and hey, isn’t American food all about hamburgers and steaks? Nevertheless, we signed up. Neither of us had ever been on a food tour before, where we expected to eat non stop for four hours? Wouldn’t be a hardship if we had to! 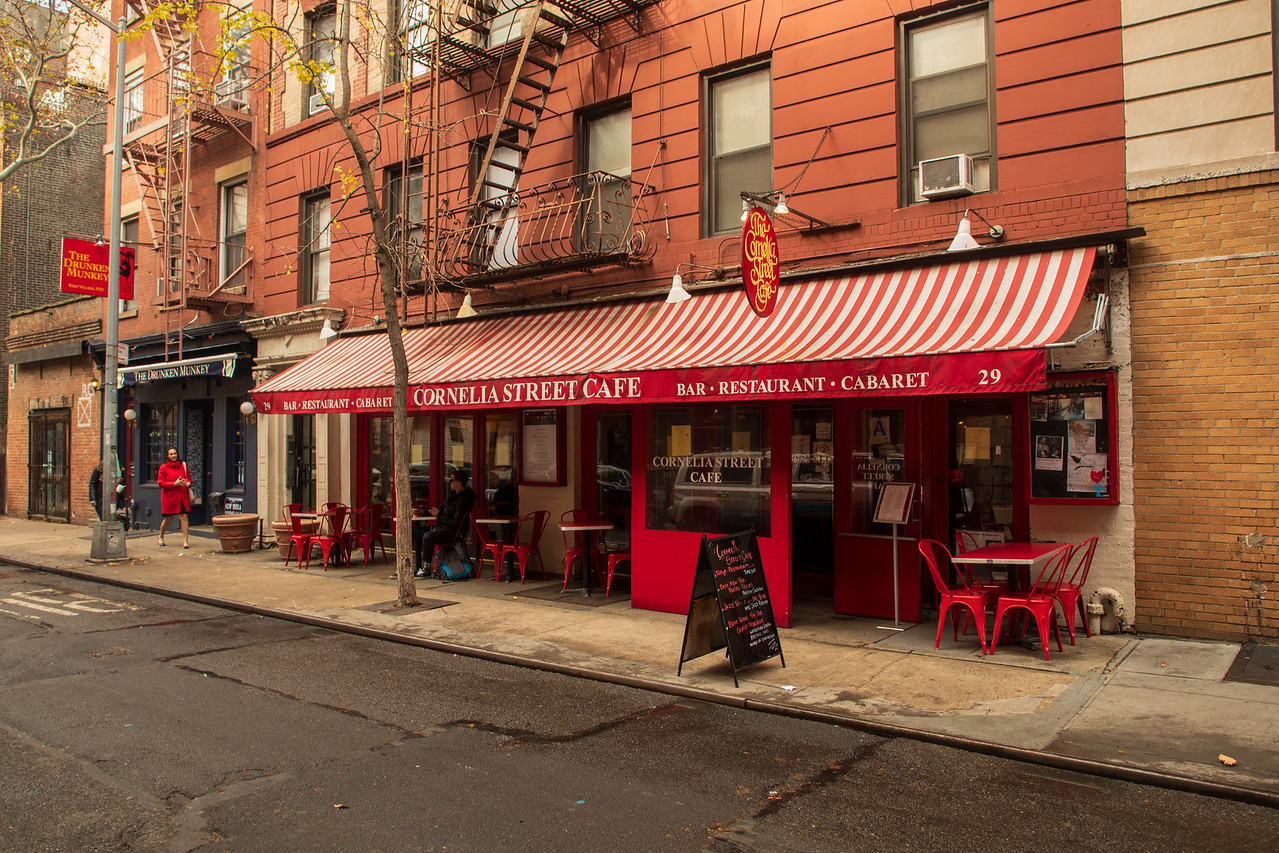 So, on a sunny but freezing cold day in New York in late November, we met up with the charismatic Laurie at 11 am prompt in Greenwich Village. Apparently, we weren’t going to be just stuffing our faces all day, although we were indeed full by the end of the tour. Instead, in addition to sampling many of New York’s culinary delights, we would also be having a fascinating stroll and learning about the history and celebrity gossip of Greenwich Village. A chance to see where Lady Gaga once worked, seeing where they filmed the making of Friends and learning about the Stonewall Riots and so much more. It all happened here in Greenwich Village, but that’s for another post. Today it’s all about the food!

No trip to New York would be complete without sampling the New York Bagel, and this soon became a staple part of our breakfast routine in our short stay in New York.

With so many different types of bagels to choose from, what do you pick? When in doubt go for an ‘everything’ bagel. An everything bagel varies from bakery to bakery but typically includes poppy seeds, onion flakes, garlic flakes, sesame seeds, pretzel salt and pepper as toppings!

Even a simple bagel with cream cheese can be complicated to order, as there were so many variations to choose from. In Greenwich Village, we let Laurie pick for us. We could have done with her in our favourite bagel bar in our Brooklyn neighbourhood as there were 95 types of cream cheese options to choose from. And in New York, you daren’t hold up the line with indecisiveness.

They Aren’t Necessarily Pretty, But You Can’t Go To New York And Not Have A Bagel

So What’s So Special About The New York Bagel?

It’s all to do with the water. New York has the perfect ratio of calcium to magnesium in its water. The soft water when it’s boiled blends perfectly with the gluten in the bread, creating a delicious chewy bagel with a hard shiny crust. The New York Bagels were undoubtedly the best we have ever tried.

We ate a lot of pizza during our time in New York. It’s the perfect, cheap, to have on the go food! Top tip for visitors to New York, if your slice of pizza costs more than a metro ticket $2.75, you’re being overcharged!

Laurie took us to a typical hole in the wall place to try a slice of pizza. One of those places you’d probably walk straight past, but oh boy it was good! The New York-style pizza is thin crust and sold in wide slices. To eat like a local, you should fold the pizza in half and eat with your hands. I gave away that I was not a native New Yorker by eating it unfolded! But having screamed with excitement during the first snowfall of New York just the day before, it was quite clear that we were tourists! 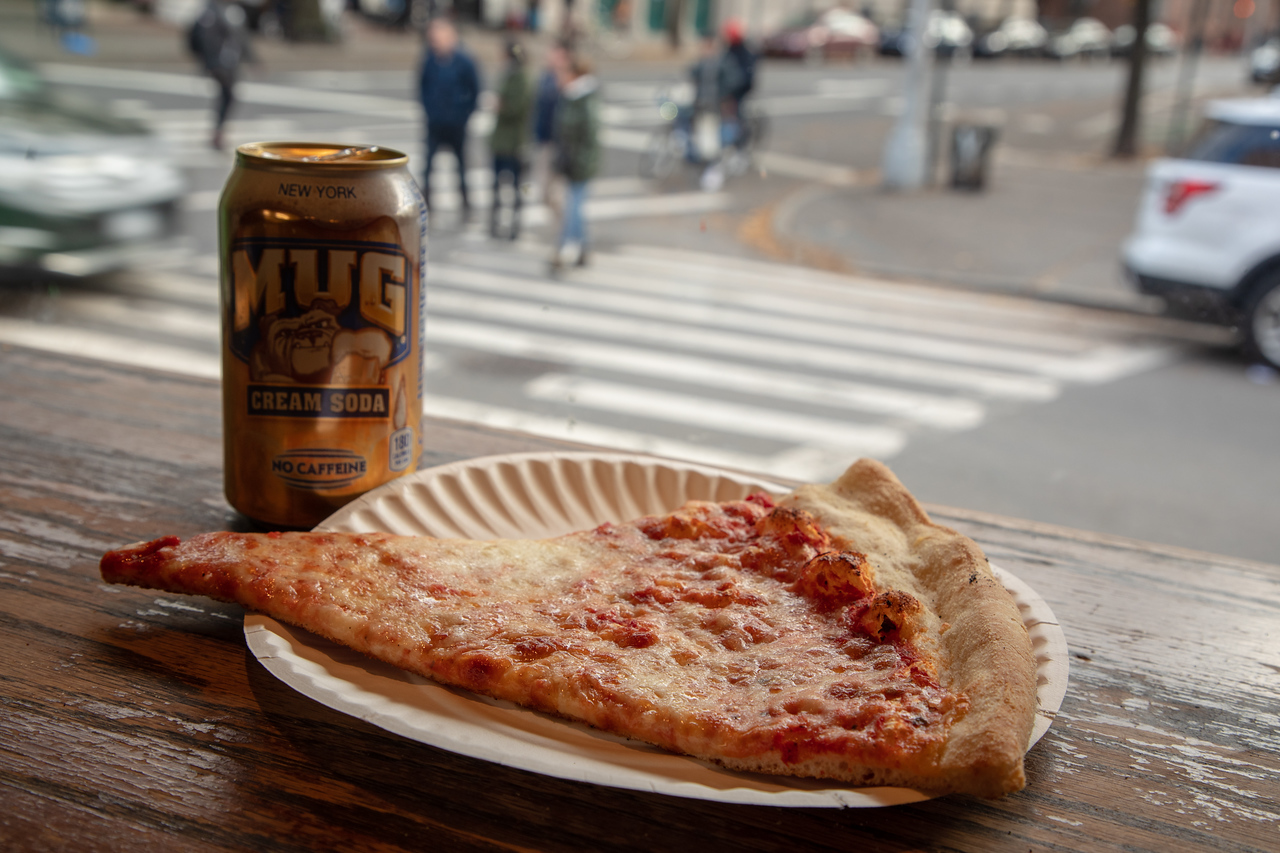 One of Jonathan’s favourite sandwiches but a little too much meat for my taste. Although the way I gobbled it up, you wouldn’t have realised that. We enjoyed our Reuben Sandwich inside a bar that from the outside looked like your average American sports bar but was once a 19th-century stable. It also had one of the smallest bathrooms I had ever been inside. If you have claustrophobia, you may want to wait a little longer!

So What Exactly Is A Reuben Sandwich?

A Reuben Sandwich is a delicious combination of food from around the world – Jewish Rye Bread, Corned Beef from Ireland, Sauerkraut from Germany, Cheese from Switzerland and dressing from Russia.

There are many different versions of how the Reuben Sandwich came to be. Some say it was invented in Omaha for a poker player named Reuben. Others say the original Reuben was created in New York City at the Reuben’s Delicatessen in the 1900s.

With so many culinary options in New York, it was inevitable to have food mashups. What’s a food mashup? A cronut – a croissant and doughnut cross. How about a ramen burger? A sushi burrito? Lollipop wine? Mexican taco with Indian curry filling? 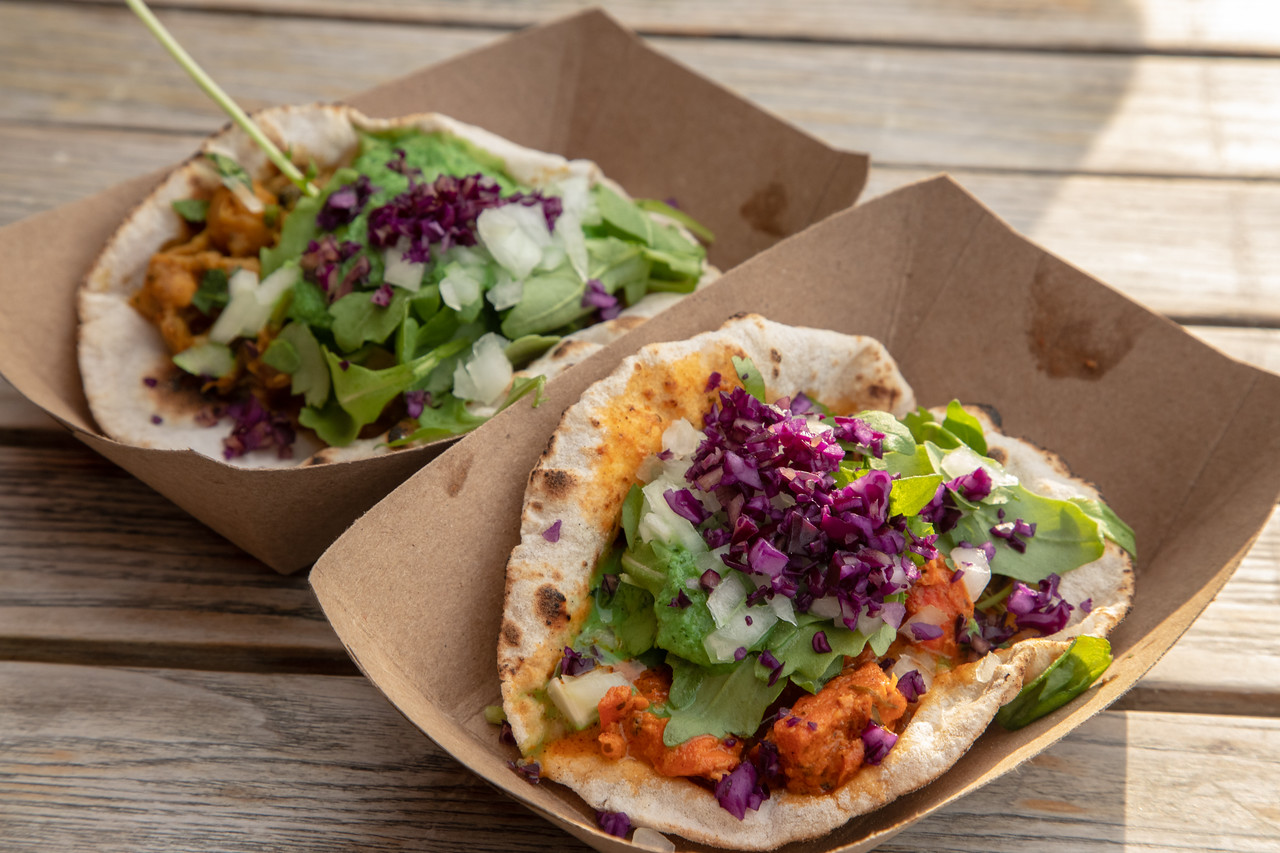 Ok, so cupcakes aren’t unique to New York. Food historians believe that cupcakes began to evolve in the USA during the 19th century. There are two theories to how the term cupcake came about. One – the cakes were made in small cups or two – the ingredients were measured by the cup. I simply love cupcakes, whatever the theory.

Laurie led us to a cute cupcake shop where you could sit on a swing at the counter while eating cakes. The cake shop was named after the owner’s third-grade teacher who always baked cupcakes for her students birthdays. We had a yummy red velvet cupcake with vanilla frosting. Jonathan got all nostalgic, ‘Oh my mom used to make me red velvet cakes for my birthday!’

When indecisiveness sets in, always opt for the ‘everything’. The everything doughnut came with a sweet cream cheese topping, garlic, poppy seeds and sea salt. It actually sounded quite revolting, but by now we had learned to trust our guide, and of course, it was delicious. 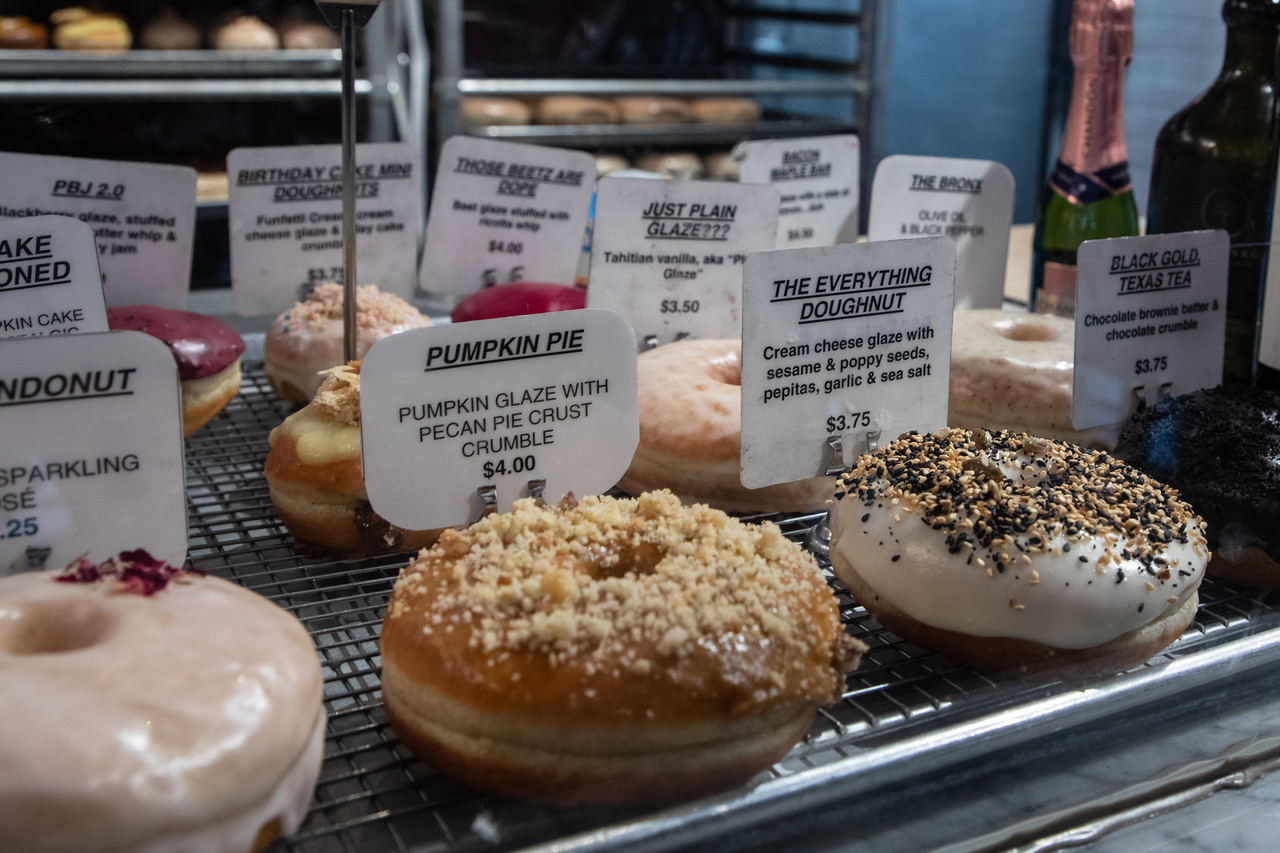 It Seems A Bit Crazy But We Loved The Everything Doughnut

Would We Recommend A Secret Food Tour In New York?

Totally! It was even more fun than we expected it to be. The historical walk through Greenwich Village was genuinely fascinating and eating where the locals ate rather than where the tourists go was great. I won’t reveal the names of where we ate, or it won’t be a secret any longer.

One of the things we both enjoyed about our tour was the small group size. We saw other food tour groups with so many people that they were forced to stand outside in the cold to try food while we could huddle up inside the venues. On that day, there was only four of us, so you didn’t feel you were holding up the group by asking questions or getting sidetracked for a moment when you pass by fantastic street musicians.

Don’t forget to wear comfy shoes and be sure to arrive on time. Tours leave promptly at 11 am.

Have you ever been on a food tour? Tell us your experiences and recommendations in the comments below.

Disclosure: Although we were guests of Secret Food Tours, NYC, all views expressed are our own.

Pit It For Later!